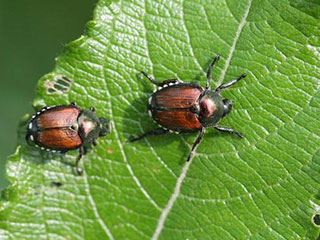 The Japanese beetle (Popillia japonica) is an introduced insect first discovered in the United States in New Jersey in 1916. The grubs (the larval or immature stage of the beetle) are possibly the most common lawn pest in New England. In fact, Japanese beetle grubs make up about 90% of the white grubs that live in Massachusetts lawns.

The non-native Japanese beetle can wreak havoc on yards, plants, and shrubs. They are the most destructive insect to lawns.

The adult Japanese Beetle feeds on over 300 kinds of trees, shrubs, grass, field crops, and garden plants and are more likely to feed in open areas on warm, sunny days. It eats leaves, flowers and occasionally fruits often on plants in the rose and grape families. They can strip a plant of its leaves, sometimes called "skeletonizing," with only the veins of the leaves being left.

This can lead to the death of a plant or they can weaken it considerably. The beetle does have natural enemies such as various parasitic wasps and flies.

Grubs eat the roots and underground stems of plants, especially grass, in April and May and again in August through October and then hibernate during the winter.

The grass may appear brown and blotchy where grubs are eating, and since they eat the grass roots, the grass can be rolled up like a carpet. If a lawn is being dug up by skunks, raccoons, or crows, particularly in March through May or in September or October, or if moles are creating a network of tunnels under the grass, it is likely that the lawn has a significant population of grubs which the animals are feeding on.

To protect your lawn from damage caused by skunks, crows, and moles, loosely place fruit-tree netting placed over a lawn. Do not pull it taut, instead, loosely gather the netting, especially 3 or 4 feet along each outside edge. Birds and mammals do not want to walk on the netting thus preventing further damage to the lawn.

Place 15 inch high stakes around an area you want to protect or that has already been dug up by animals. Attach 2 or 3 inch wide silver Mylar tape (purchased party supply stores) to the stakes and crisscross the area with the tape. The area can remain covered until the beetles emerge in June, or if it is fall, until cooler weather, for example, until October, when the grubs start to hibernate deeper in the soil.

When to Take Action

The quantity of grubs can be anywhere from 175 to 1,531 per square yard of grass. To determine whether or not there is a significant number of grubs to warrant control practices, remove a square section of lawn 6 inches by 6 inches and 4 inches deep.

Turn the section of lawn unto a flat surface, use a trowel to break up the soil, and place any grubs you find in a cup. A healthy lawn can usually tolerate 8 to 10 grubs per square foot without showing signs of distress.

There are several options to control an excess of grubs and the adult beetle.

A Note on Chemical Controls

There are many products on the market such as diazinon and chlorpyrifos (Dursban), but most of them are harmful to birds, other insects, and people. Therefore, we do not recommend them.