Panhandling is a solicitation made in person for immediate donation of money or other gratuity. This may be done by vocal appeal (asking, requesting, coercing (badgering), sympathy appeals, harassment, threats, or demands) or by nonvocal appeal (usage of signs or other signals gestures, postures, children, animals, or props such as toys and musical instruments). 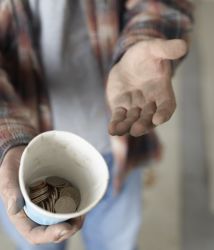 In Reed v. Town of Gilbert, Arizona, the U.S Supreme Court ruled in 2015 that government regulations curtailing free speech have to be as narrow as possible and must fulfill a “compelling government interest.” At issue was a town ordinance that restricted where signs for religious services could be displayed. But the decision, which applies to any local rules that limit certain types of speech, has caught some cities by surprise.

In June of 2017 a federal judge declared the City of Slidell’s panhandling ordinance unconstitutional, ruling that the law violated the First Amendment rights of people asking for money anywhere within the Slidell City limits. Under the ordinance, panhandlers would have been required to register with police and acquire a permit to engage in a constitutionally protected activity. The American Civil Liberties Union of Louisiana brought the suit on behalf of Gary Blitch, a U.S Army veteran, and his co-plaintiffs David Knight and Daniel Snyder.

The American Civil Liberties Union and other civil liberties groups have long argued that it was unconstitutional for municipalities to prohibit people from begging for money in public spaces.

Based upon the decisions of the U.S Supreme Court, panhandling is protected under an individuals first amendment right to freedom of speech.

If the panhandler causes a disturbance, such as steps into traffic, or stopping the flow of traffic, or damage to property, please contact the Framingham Police Department at 508-872-1212.